The weekend began late, but still with a BANG!

Crew Bill, Sarah, Guy and Ollie didn't reach the fuel dock at Annapolis Landing Marina until after dark, but the party began immediately. Provisions and gear were loaded and stowed even as the party broiled around the activity. Local guests from the marina joined us in Kelly IV's cockpit as we toasted the cool evening and discussed our plans for the following day. No one actually timed the party's conclusion, but we did depart the fuel dock before the marina needed the space in the morning. 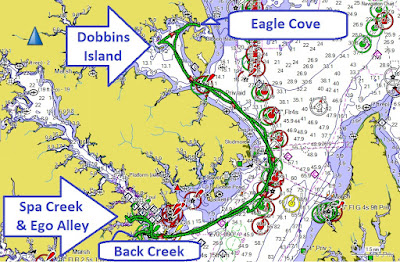 Our newly gained local knowledge included news of a horse farm on a beautiful anchorage at the north end of Gibson Island, Magothy River. Although we made that our destination for the weekend, we decided a swim stop at Dobbins Island (definitely on the way) would prove fun as well.
Above video by Bill Paviol
Above video by Bill Paviol
There was enough breeze that Kelly IV sailed with her main and jib under the imposing Bay Bridge, then motored into the Magothy and anchored off Dobbins Island. The weather was bright and clear so the crowd was easily a couple hundred or more people, families, youths, young adults, cruising oldsters and everyone you might imagine has access to a small boat. There were even a couple large motor yachts anchored to watch the activities. Given the large crowd, it was no surprise to see the representatives from Maryland DNR, USCG, and the Maryland State Police cruising the waters and beach. Although we witnessed them board a nearby sailboat, there were no scenes that would make the papers. In fact, Bill took a number of great videos showing the festivities.

Once lunch and swimming were concluded, we raised anchor and headed the last two miles to Eagle Cove. After a brief dogleg through the protecting shoals, we emerged into a sizable bay with plenty of depth and room for many boats. In fact, Kelly IV was probably one of about twenty small yachts to anchor there. Even so, there was still plenty of room for everyone's water toys and we were not to be left out. Bill, Sarah and I lowered the dinghy, rigged her sail, leeboards and rudder, then took turns sailing the little pudgy between the wide open spaces amongst the anchored vessels. Sarah particularly enjoyed sailing close ashore to see the horses up close.

The meal that night was an extravaganza including alligator, tuna and sauces prepared by chef-extrordinaire, Bill. It was delicious and there were no leftovers!

Sunday proved to be another grand weather day, but the forecast predicted otherwise so Kelly IV departed early to ensure an easy trek back and a simple disembarkation of crew and gear. The early departure put us back in Annapolis by 10am and the weather was perfect for a trip through Ego Alley. We made the trip twice and tied up at Pusser's for a couple drinks and relaxed conversation before returning to Back Creek and the workaday world.

More About CaptMurph and his Cruises